What Are Sixth-Degree Burns?

A sixth-degree burn is the most severe type of burn, causing extensive damage that extends past the skin and all the way to the bone. Such injuries are incredibly fatal to victims, due to the amount of shock and damage the body experiences.

Medical practices classify burns into several categories, both to identify the severity of damage and to administer proper medical treatment. While first-, second-, and third-degree burns are common knowledge, many people are unaware that there are six degrees of burns that refer to severe levels of damage.

If you or a loved one have suffered a burn injury, we can help. Call our Phoenix personal injury lawyers today for a free consultation .

What are the Common Causes of a Sixth-Degree Burns?

Almost any cause of a burn has the potential to create a sixth-degree burn, so long as there is extensive exposure. The prolonged time of contact allows the burn source to not just damage the top layers of skin, but also to burn down to the bone.

People are likely to suffer from a sixth-degree burn if they are involved in a fire, radiation exposure, explosion, or cooking accident, car accident, or contact with high levels of voltage through an electrical appliance or connection. Even firefighters, who go through training to enter burning buildings, are at a risk for these more severe burns due to work hazards. 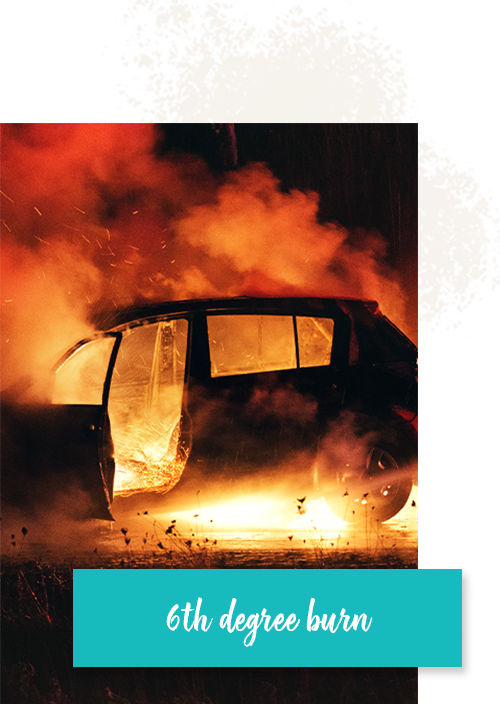 What are Symptoms of a Sixth-Degree Burn?

A sixth-degree burn damages everything down to the bone, including skin, fat, and muscle. Besides exposing bone, as a fifth-degree burn may do, a sixth-degree burn will also damage the bone. Most often this results in charring, both of the bone and any surrounding tissues.

Charring can occur in other degrees of burns, but it is often to a much smaller extent. In those cases, medical practitioners would make efforts to remove the charring and other dead tissue because it poses a risk for infection and impedes healing. Because of the extensive level of charring for sixth-degree burn victims, there is practically no chance of survival.

All types of burns carry the risk of an overreactive inflammatory response, which can lead to loss of fluid and shock. While the nerve damage suffered during a sixth-degree burn will mean that a victim will not feel pain, the severity of the burn damage is guaranteed to result in shock. When this occurs, different organs are not receiving proper amounts of oxygen and blood flow, resulting in fatality for the victim.

What Treatment is Available for Sixth-Degree Burns?

Even with immediate treatment, victims of sixth-degree burns are unlikely to survive. As such, while medical practitioners may try to follow procedures of stabilization and treatment standards for treating severe burns, these treatments will not be effective. Unlike some developments that have allowed for the survival of those who have suffered other severe burn types, there have yet to be any breakthroughs for the highest level of burn injuries.

A diagnosis of sixth-degree burns will only occur during an autopsy for someone who has been through a severe experience, such as radiation exposure. Depending on future technology developments, sixth-degree burns may become a more common cause of death, but treatments for these injuries may also develop. Several associations are researching further practices to help victims of severe burns survive.

If a victim of a sixth-degree burn did survive, it is likely he or she would need the same type of treatment as a survivor of a fifth-degree burn. While skin grafts are a common treatment for many burns, the extensive damage of severe burns makes grafting an ineffective process. Amputation is necessary, as the damaged area cannot naturally recover.

Like fifth-degree burns, sixth-degree burns rarely occur, and the high mortality rate means that many people are unaware that these types of injuries even exist. However, they do happen – and with fatal consequences.